skip to main | skip to sidebar

Bass Baked in a Salt Crust 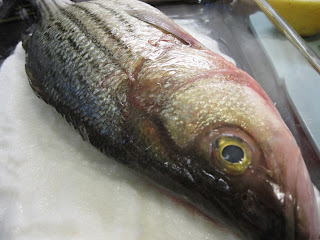 Why on earth would anyone waste so much salt cooking a fish, you ask?  As for the mechanics of the matter, the salt dome on the fish acts like an oven within an oven.  Inside it's salty cave, the fish begins to steam in it's own moisture, but since salt absorbs moisture, the dome creates a dry environment and the fish ends up roasting.  Hm... sounds pretty much the same as if you roasted the fish in the oven without using a whole box of salt... 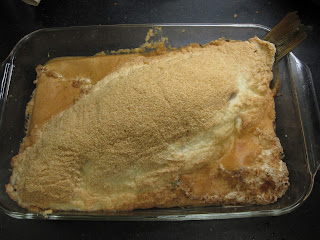 To be honest, the fish doesn't taste that much different roasted in all that salt.  It would be a stretch to say that the closed environment caused the citrus and herbs packed into the fish to give it a more concentrated flavor.  If you use your imagination, it does seem a little moister...  Maybe.

So, again, why roast a whole fish in a big 'ole mess of salt if it tastes the same?  Because you can, I answer! It's great fun, and it looks wildly impressive presented at the dinner table with a dramatic flourish!  This is not the dish you cook at home, alone, without a whole gaggle of guests to ooh and ahh over your masterful cooking skills. 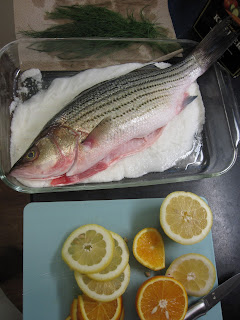 Cooking a whole fish might sound intimidating (all the better to impress people), but actually it's really easy, and the fishmonger at the grocery store will do all the hard stuff for you (get rid of the guts, ew).  So without further ado, I give you a ridiculously complicated way to cook fish that tastes exactly the same as sticking it in the oven plain and simple.  This one is about showmanship!

Ingredients
One 2-4 lb bass (or similar sized white fish) - ask the fish guy to clean and scale it
4c. kosher salt
8 egg whites
Fronds from one fennel bulb (save the bulb to roast with some other veggies)
2 thin lemon
2 thin oranges
Extra virgin olive oil

Preheat the oven to 425 and let the fish stand at room temperature for 15 minutes.  Stir the salt and egg whites together in a medium bowl, creating a snowy mixture.  In a large baking dish (big enough for the fish!), spread a layer of the salt mixture about 1/4 in thick, covering an area just larger than the fish.  Lay the fish on the salt bed and stuff the fennel fronds, lemon and orange slices into the cavity of it's belly.  Spread the remaining salt mixture over the fish, and pat with paper towels to remove any excess moisture.  Roast for 40 minutes, or until the thickest part of the fish reaches a temp of 125 (good luck stabbing a thermometer through the salt armor, though.  I totally gave up on taking the fish's temp). 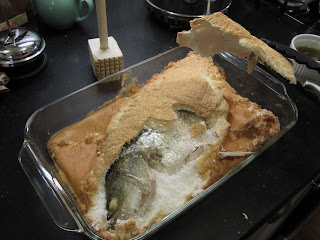 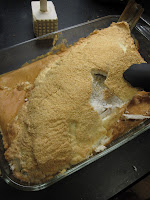 To serve the fish, whisk it out of the oven and over to the table.  Have handy another dish to hold the crust remains after you excavate your meal.  With a big kitchen mallet, crack the crust and break it into large pieces.  Remove the crust and set it aside. 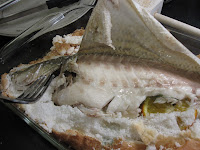 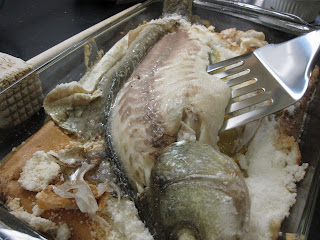 Use a narrow spatula to peel off the top layer of skin from the fish, and then lift out the fillet beneath, setting the fillet on a serving platter.  Then, start at the tail end of the fish and remove the fish skeleton in one piece, setting it aside.  Lift out the bottom fillet and transfer it to your serving platter.  Serve with more kosher salt and lemon wedges.  Yum/wow! 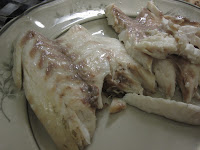